What’s in a Name?

Naming your blog is a serious matter! I googled the phrase “coming up with a blog” and received 35,200,000 responses! 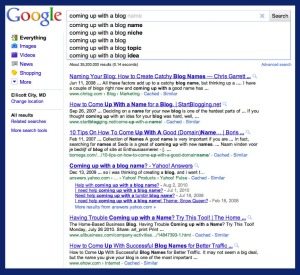 As mentioned before, one of the main issues I was having prior to launching this blog was choosing a name. I’ve had blogs in the past, but a majority of them have been through social media sites like MySpace and Facebook. These were primarily an outlet for sociopolitical rants and raves and opinions on celebrity and pop culture. They were also a way to provide family and friends with a glimpse into my life as a developing writer amid the backdrop of the Boston Globe, Rolling Stone, and CNN’s “Larry King Live.” Additionally, I blogged from Malawi, Southeastern Africa, while I was in the Peace Corps. Due to the nature of my positions at each of these organizations, I was never free to candidly voice my mind with 100% disclosure.

During my brief stint at the Art Institute of Washington in Arlington (after one quarter, I realized it wasn’t the right academic fit so I transferred to Boston University’s Center for Digital Imaging Arts), I created my first blog to which I was accountable for.  Our instructor ominously referred to it as a “digital morgue.” The web publishing tool we were instructed to use was Blogger (created by Google). I used the name “Digital Sanchez Digest.”

I’ve always been a fan of the name “Digital Sanchez,” since the internet is an electronic interface. Part of me wanted to break free from my older site and start anew, so I thought of the title “Regarding Tess.” This name is more feminine and lends itself to broader content opportunities.

When faced with a difficult decision, however trivial, I turn to my friends and family for advice. I took a 21st-century approach with my question too, using Facebook, Twitter, E-mail, and text messaging. In all, I received 37 responses (24 for “Regarding Tess” and 13 for “Digital Sanchez”).

What was great about getting the public engaged was that I received alternative viewpoints and perspectives that I hadn’t seen or thought of. Below is a thread from Facebook touching on a couple of my friends’ thoughts behind each title.